Journey of a GemInEye: Part 1

We all know the saying here in New York, "If you can make it here, you can make it anywhere." And do you know why that is? I've learned that almost every system in New York is set up for you to lose. What's more frustrating is that you'll lose even doing the right thing.
Over the last few years, I've had quite a few problems with the management company of my apartment, including a full two months of no heat in my apartment the first winter I lived here.
If you drive in NYC, you know the costs associated with driving reach far beyond gas, insurance, repairs, etc. Driving in NYC also includes risking getting exorbitant tickets that far outreach the violation. Accordingly, I pay to secure a spot in a lot since the average cost in tickets surpasses the cost of the parking spot.
I came home a little after midnight tonight and found someone parked in my spot inside my gated driveway. After a little deliberation, I decided to first call a tow company. Even if they couldn't help me immediately, they could lead me in the right direction. I also called the local precinct, which doesn't allow you to speak to anyone directly. I redirected myself several times through the automated messages and finally hung up. The tow truck driver had explained I had to get a summons on the car before he could tow it. They couldn't tow it without it.
I called 311 as I was instructed on the precinct's automated message and reported what was happening. The operator assured that I was taking the correct measures by calling 311 to initiate getting the car towed. He took all the information and told me the precinct would be notified.
So I waited. And waited. And waited some more. I fell asleep for a bit in my car and was awakened by my neighbor who was leaving for work. He said cars have been being parked in his spot, too. I felt frustrated that this has been happening on a regular basis to people who are paying good money to be able to freely park.
The police finally called me about 4 and a half hours after I reported the incident and arrived about a half hour later. When I explained I had my lease to prove it's my spot, they said that they couldn't give a summons because it's on private property. I asked them if they could offer me any other solutions. They said I could take a picture of the car parked in my spot and take then to small claims court.
My management company has no towing company information in the lot and no emergency number to reach them. This system, in particular, is designed for good people to lose despite their best efforts to do otherwise.
After living in two other states and having some perspective outside of my life in New York City, I can honestly say that New York is designed in such a way that the odds are simply against you. Look at the cost of living in relation to the rate of pay; many are living at the poverty level despite working hard at good jobs.
I look around often and wonder why people stay. I wonder why they struggle and endure the coldness of NYC. Last night I saw a homeless man covered in a blue tarp as he slept in the rain in the west village. I wondered why he would go through that here. But then I remembered my own experience being in transition without a place to stay, but still staying here...living in my car to hold on to my dream. New York has a magnetism that many have experienced, but perhaps only a few can truly explain. Maybe they just stay so they can say they made it.
Posted by K Hox at 6:31 AM 5 comments:

Journey of a GemInEye

Wow, it's been 2 years, almost three. I had to dust off my blog and check in. A recent conversation about my blog got me to realize how much people enjoyed my blog when I was writing. But much like the title of my blog, "life is what happens while you're busy making other plans." Tis true!

I haven't been neglecting the blog for no reason however. All good things have kept me away...like the completion of my very first full length album, "Journey of a GemInEye!" The album is available through all major MP3 retailers and physical copies are available by sending $15 and your email address via paypal to kathrynfhoxie@gmail.com 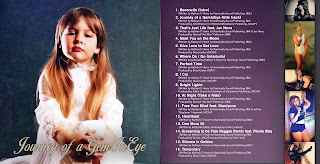 In other news, I will be making my debut in TEXAS this March for SXSW in Austin, Texas. If you're unfamiliar with this festival, it's one of the biggest music and film festivals in the US. I'll have more news on this soon.

October proved to be a super busy month for me going into November. I started November off with a live television performance for the Bronx BETA Awards, where I took home the honor of the Encore Awards thanks to the studio audience. I've attached a link to catch some of the behind the scenes footage before my performance.

I'd like to get back into the habit of posting once a week/ every other week. We'll see what my schedule allows, but I know the importance of sharing my journey, my story.

Thank you to everyone who has taken so many steps with me. We're a long way from where we began and we've only just begun.