Him or the Music REMIX

Him or the Music

If there's anything, I've learned in this journey, it's that we can do so much more together than we can on our own. I'd never have my music out on iTunes without the kindness and generosity of others believing in my dream. Accordingly, I'm working hard to help others with their dreams. It's time to pay it forward. That's what life is really all about. It's about learning how to move forward in a positive direction and then showing others how to do the same and helping them move in that direction.
In this spirit, I'd like to introduce you to someone who's graciously featured me and my music on his blog, "H Dirt." Take some time to check out his work. He's got his hand in several projects...reminds me of someone else I know. ;) Enjoy! 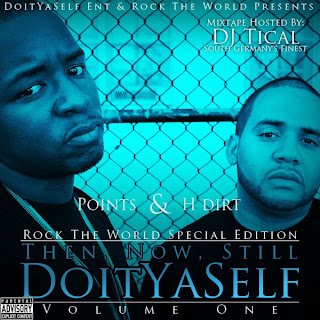 H dirt Biography: H dirt formerly known as Dirty Hari since the early 90's way before he spoke a tongue of English, has been a fan of Hip-Hop music. Coming home from school and tuning in to Ralph McDaniels' "Video Music Box". Hailing from borough of The Bronx, New York City. H grew fascinated of the Art Rap Music and its culture but never thought of persuing a rap career...

Then, Now, Still DoitYaSelf Vol.1
Mixed & Hosted by DJ TICAL
AVAILABLE NOW - DIRECT LINK > http://www.mediafire.com/doityaself
WATCH THE PROMO VIDEO! DIRECT LINK @ http://youtube/clPp3vGP1o4
MIXTAPE DESCRIPTON
New York recording artists Skylar "Points" Williams (Rapper) & Hari "H dirt" Espinosa (Rapper/Actor/Manager), who are a part of the hip-hop group M.P.H (Money, Power & Honor). Are bringing you their newest project to properly reintroduce themselves back into the rap game. Not just as artist or as a group, but also as an indie label. Devised partly from their own indie label, Do It Ya Self Entertainment titled: "Then, Now, Still DoitYaSelf Vol.1" MixTape.
Artist Appearances by Points, H dirt, Molly, Thural, Promise, Victor Dortch, Snugz, Anita Clay and battle rapper DNA. Production by Dj Tical, Victor Tortch and Joe Hernandez.
Mixed & Hosted by South Germany's own Dj Tical. Appearances by Molly, Thural, Promise, Victor Dortch, Snugz, Anita Clay and battle rapper DNA. Music production by Dj Tical, Victor Tortch and Joe Hernandez
This MixTape also marks their first collaboration with a DJ. Mixed & Hosted by South Germany own DJ Tical (Rock The World Entertainment), The official Wu Tang DJ, Do It Ya Self Entertainment DJ and Vel a/k/a Mr. 7 Cities.
Dj Tical's WEB SITE: http://www.wix.com/thisisdjtical/portfolio
M.P.H The Saga Continues... A Short-Preview DocuFilm
THE
OFFICIAL MOVIE TRAILER COMING SOON!
Inspired by the lives of Skylar Williams & Hari Espinosa.
Narrative by Joyce Elwick. W
ritten & Directed by Hari Espinosa
ABOUT THE FILM:
This is the real life story of two long time friends (Skylar Williams known as Points & Hari Espinosa known as H dirt, formerly known as Dirty Hari), who shared similar goals and aspirations to follow a career in hip-hop music. This film takes place in rough streets of New The City - The Bronx, Underground Hip-Hop scene. Where they became locally known for their music. Since establishing the rap group (M.P.H), in the summer of 1999. But it was in 2005 when Points recruited big supporter Barbara Laureano, nickname Molly into M.P.H - That kicked things off for the inspiring rap group. In return making her an invaluable asset to their growth.
SYPNOSIS:
Music, Drama & Life became their struggles, yet their passion for success was undeniable and could not be ignored. M.P.H collectively were determined to become the next big act in hip-hop. Unfortunately differences in opinions, poor finances and personal rifts greatly affected the progress of the group.
A Film Written & Directed by first time director (Rapper/Actor) Hari Espinosa and edited by Victor Tortch. Co-Written by Darren Whitfield, Janice Smith and Joe Hernandez. Produced By Hari Espinosa & Joe Hernandez. Narrated by Actress/Singer/ Model Joyce Elwick
WATCH OUR PROMO VIDEOS: http://www.vimeo.com/mph
This film is presented by Do It Ya Self Entertainment
ALSO COMING SOON!
DJ TICAL & M.P.H: "WE WANT IN" EP
DoitYaSelf Vol.2 (MIXTAPE) Hosted & Mixed by Dj Tical
"We Run It" by Points - Produced by Joe Hernandez
AVAILABLE NOW FOR DOWNLOAD! LINK BELOW
http://itunes.apple.com/us/album/we-run-it-single/id419265186 )))
PREVIEW THE ENTIRE TRACK ON POINTS' YOUTUBE CHANNEL
URL LINK > http://www.youtube.com/watch?v=CpiS0CaOvAs&hd=1 )))
ALL OUR ORIGINAL SONGS: http://www.soundcloud.com/mph-1
BRIEF BIOS
Points Biography: Points "That Ni*** That Sh** Poppin' " A phrase which spawned a wave of infectious tunes in the New York Underground Hip-hop circuit in 2003, when releasing his first tangible project DEMO/MIXTAPE Vol. 1 & 2 From 149Th St., 3rd Ave in The Bronx and back to his old stomping ground on 111 St. 7Th Av in Harlem...
M.P.H Biography: (M.P.H) an acronym which has signified "Money, Power & Honor", for the New York Underground Hip-Hop group which is consisted of two original members " Pac-One now know as Points and neighborhood friend Dirty Hari now known as H dirt, then in 2005, Molly, appointed by Points as a big supporter and business partner. Established in the mid summer 1999...
INDIE LABEL
CONTACT MANAGER: Hari "H dirt" Espinosa - EMAIL: info@moneypowerhonor.com
M.P.H Blog: http://www.moneypowerhonor.com
TWITTERS: http://twitter.com/pointsnews
http://twitter.com/ElDirtyNews
http://twitter.com/DoitYaSelfPR
http://twitter.com/thisisdjtical
Posted by K Hox at 11:13 AM No comments: